It says that only a limited quantity is remaining. Is Valve discontinuing the Steam Controller? Is a new revision on its way? I have no idea, and Valve tends to be pretty secretive.

Either way, a [Steam Controller][sc] for $5 is a pretty good deal! 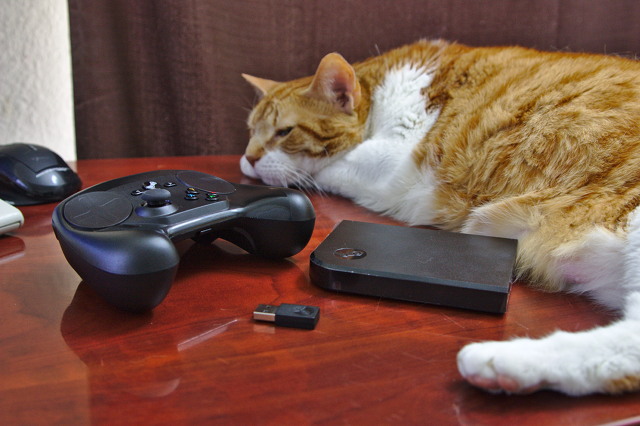 I’ve had mine for more than three years. I have to admit, though, that I haven’t used it in a long time.

For me, the most useful advantage of the Steam Controller is the ability to play first-persons shooter games with nearly as much accuracy and control as I have when using a mouse. Sure, I’d be at a huge disadvantage playing an online multiplayer game like Team Fortress 2, but it is more than capable of allowing me to play single player games.

The first thing I did with my Steam Controller was run through a game of Borderlands 2 using Zer0. It took me a while to get up to speed, but I was doing alright. The combination of the touch pad and gyro for aiming take some getting used to, but it works surprisingly well.

The Steam Controller worked even better when playing Saints Row: The Third. Aiming in Saints Row with the mouse is fantastic, but driving with the keyboard is a horrible experience. Aiming with a PlayStation controller is horrible, but driving is a dream.

In this case, the Steam Controller combines the best of both worlds. Aiming your weapons is almost as accurate as using a mouse, while driving is exactly the same as using a standard gamepad. You can’t beat that.

I was disappointed when I tried to use the Steam Controller to play Grand Theft Auto V. The controller is extremely customizable. You can map various functions to keys, mouse actions, and gamepad functions. GTA doesn’t really like it when you use the mouse, keyboard, and gamepad at the same time. Things get a bit goofy.

The Steam Controller isn’t for everyone

You have to be ready to tinker. Steam allows you to upload and rank configurations for each game, so you don’t have to create your own. You will have to spend time figuring out which configurations work for you.

This is kind of a bummer. It seems like a problem that could have been solved better after three years.

If you don’t like tinkering with your settings, you probably don’t want a Steam Controller.

The Steam Controller isn’t right for all games

You need a good d-pad and real buttons. This is the sort of game where I reach for my PlayStation 4 controller. It has a fantastic d-pad.