I’ve had my new self-balancing electric unicycle in my possession for three days so far, but I’ve only had a chance to take it out to practice with it once. I’ve already learned some very important lessons, and in hindsight, this was mostly quite obvious!

Everyone was able to ride my electric bike

The first time I met up with my friends flying quadcopters at the park, I loaded the e-bike into my car. All my friends rode the bike. They were smiling and having a good time.

This follow footage is a bit shaky, but I need it for a blog post. At least until I record better chase footage. I was trying to keep my distance so @UnitedNegro wouldn't get nervous, and my props had endured many crashes already. pic.twitter.com/fy0Szk9Sty

The bike is big, heavy, and unwieldy. It is quite a task trying to get it into the car by myself.

Even so, my old Hover-1 XLS bike has one big advantage over a unicycle, OneWheel, or electric skateboard. Almost anyone can get on the bike and successfully ride it on their first attempt.

My wife got right on the bike and had fun. Every time strangers at the park comment on how unique my bike is, I offer to let them take it for a ride. They only take me up on the offer about 10% of the time, but when they do, everyone figures it out immediately.

Unicycles have quite a learning curve!

Two of us practiced riding my InMotion V5F SoloWheel Glide 2 unicycle yesterday. I practiced less than I should have. Practicing was more draining than I expected, and I quickly realized that I was going to be in trouble, because I didn’t bring anything to drink.

My friend Tanner is 10 years younger than me, and he’s owned a skateboard before. He took to it pretty quickly.

It was about 60 degrees outside. Not hot, but not chilly, and on his first few runs, Tanner was sweating quite profusely. Riding the unicycle is MUCH more tiring when you don’t know what you’re doing.

I practiced some with my InMotion V5F SoloWheel today. Not as much as I should have, though. @UnitedNegro is already more advanced with my wheel than I am, but I think I'm doing a good job.

I'm at the point where I can manage to get on the wheel without leaning on a wall! pic.twitter.com/X7eSk2TauB

Before we packed up, we had used almost 1/3 of the battery. By then, Tanner was quite comfortable, and we were using the app to see how fast he could manage to go. He went fast enough that the wheel warned him that he had reached the maximum safe speed.

I’m not doing as well as Tanner, but I’m happy with my progress. At first, I needed something to hold on to in order to mount the unicycle. It only took me a few runs before I could ride across the rough, aging parking lot.

By the time we were packing up, I had gotten to the point where I could mount the unicycle out in the open and ride across the parking lot. I can turn, but not well.

I feel like I made good progress, especially when you consider how little time I actually put in so far!

There will be no casual unicycle rides

This is disappointing to me. You can’t just get on the unicycle and go. You have to spend a half hour or more just learning to ride ten feet. 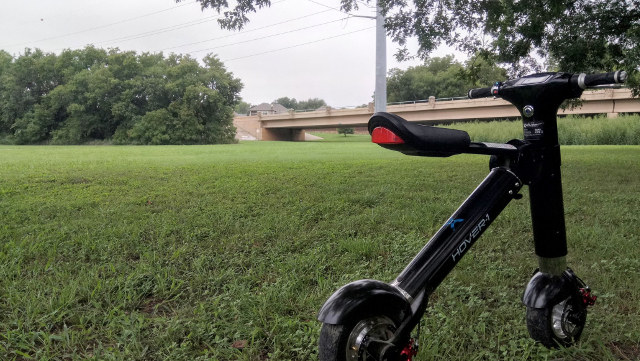 That also means there won’t be any random quadcopter retrieval with the unicycle. The only people that can take the unicycle out into a field to retrieve a crashed drone will mostly be people that already own their own unicycle.

I’ve only had one day of practice so far, but I’m already convinced that a unicycle is the best small electric vehicle for my needs. The range is good, the speed is more than adequate, and the 25-pound weight of the InMotion V5F is perfect for me.

It is absolutely awesome that any random person can get enjoyment out of my electric bike, but the thing is just too big, clunky, and heavy for me to take with me in the car. I bet I’ve loaded it up into the car fewer than five times!