I am not a knife guy. The only things I carry every day are my phone and wallet. I don’t get into a lot of situations where I need a knife.

My favorite knife has always been the Swiss Army Cybertool, and I rarely even use its knife. My favorite feature of the Cybertool is its bit driver and bit storage. If I could buy a Cybertool with just the bit driver, I would do it in a heartbeat.

Last night, my good friend @briancmoses gave me an awesome Saros knife from Hathaway Knives last night. I'm trying to learn how to look cool when I flick it open. Am I doing a good job?https://t.co/MPXfjfbkQa pic.twitter.com/qCHluGY54b

For most of my professional life, I’ve been much more likely to have to unscrew a server or PC case. When I do need to cut open a package, I’m more likely to reach for a razor of some sort than a knife.

Why am I telling you this? I want you to know that this is a quick review of a knife by a guy that knows nothing about knives. I do know a little bit about materials, machining, and CNC mills. I don’t know enough about any of these things to make a knife like this, but I know enough to understand what’s going on here.

I was expecting a knife comparable to my old Bear Hunter

The first time I went fishing with my uncle 30 years ago, he gave me a Solinger Bear Hunter knife. I gutted my first and only fish with that knife. I still have that knife here in my office.

Brian pointed me at his cousin Gabe’s Saros knife on Instagram almost a year ago, and I’ve been keeping an eye on them ever since. He said one was definitely going to be coming my way, so it seemed like I should be keeping an eye on, right?!

I got my #Saros knife from @hathawayknives yesterday, and it really is a work of art. I'm not a knife guy. I don't know what I'm talking about. In my mind, I've been comparing the Saros to this old Solinger "Bear Hunter" knife I've had since I was 12. I was surprised how much more compact the Saros is. The cutting edge is less than half an inch shorter, but the Saros is just so much more compact and comfortable. I am aware that these two knives aren't in the same category. The cheap Solinger knife is just the most comparable knife I own! I'm looking forward to writing about this awesome knife. I have no idea what hashtags to use, so #edc #knife.

I have a habit of putting a lot of time into researching expensive purchases, but Brian made the Saros an inevitability. I wasn’t checking lengths and weights. I wasn’t asking Wikipedia about different grades of steel. I was just watching short videos on Instagram. That made me think the Saros was roughly the size of my old Solinger knife. I was right, but I was also very wrong!

There’s a lot of overlap in the tasks these two knives can be used for, and I know exactly which ones I’d prefer to carry.

The Saros is a work of art

Gabe said that his primary goal was to design a knife that has the largest possible blade with the sleekest possible carrying dimensions. I’d say he’s done a fantastic job of meeting that goal!

He’s nailed the functionality, which is awesome, but forget about that. This knife looks and feels absolutely amazing.

The handle is machined from a single piece of anodized titanium. That means there are no seam and no fasteners keeping the handle together. It is a solid, sturdy, beautiful piece of metal. Gabe seems to be offering quite a few different anodization options. Brian bought four knives, and each one had different colors and patterns. 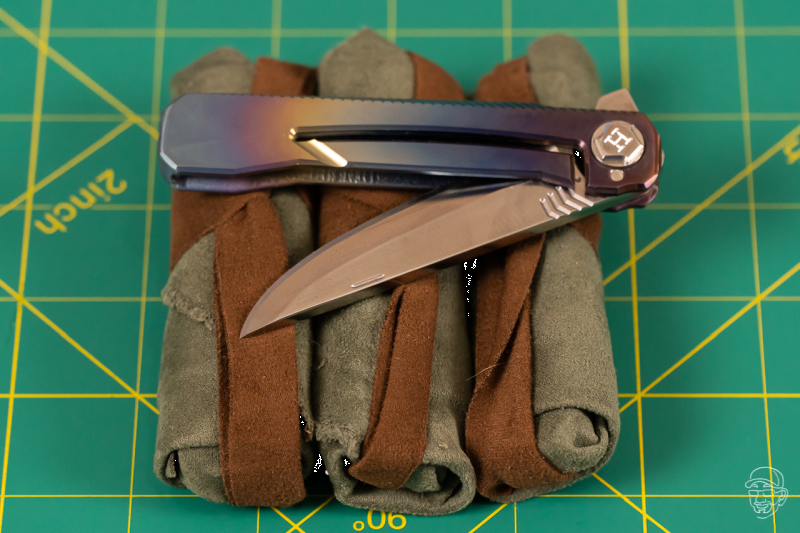 Speaking of the four knives Brian bought, you should check out Brian’s write-up on the Saros. Brian gave me one, he’s keeping one, and he’s giving two of them away!

Gabe is using S35VN steel for the blade. I learned everything I know about different grades and types of steel from This Old Tony, and that means that I know very little. A couple of people have told me that this is fantastic steel for a knife blade, and I’m choosing to believe them!

The first thing I noticed when I opened my Saros was the cutting edge. Gabe hand sharpens every one of these knives, and he seems to be taking them to a much sharper edge than any other knife I own! The sharpened part of the edge is much deeper, and I’m assuming this means it has been brought to a rather acute angle at the edge.

As an amatuer designer, so much of the Saros impresses me

The very first thing I noticed when I started fidgeting with my Saros is the titanium locking mechanism. The lock is two or three inches long, and when you fully extend the blade, that piece of titanium clicks in behind the blade to hold it in place.

The length of that titanium piece needs to be just the right length to catch the blade, and it has to be flexible enough to easily push it out of the way with your thumb. There’s a little notch cut at the bottom of the lock to make it more flexible.

I immediately pictured Gabe testing and changing this over and over again to get it just right. How far into the handle should the locking mechanism extend? How deep does that notch need to be cut?

I’ve made enough snap-together 3D-printed designs to know that you probably don’t get this right on the first try. It doesn’t even matter if you do the math correctly. Waiting for another print to run to test again is annoying. Can you imagine having to cut another block of titanium to test again?!

I don’t understand how to classify the Saros

Ever since holding the Saros in my hands, I’ve been attempting to classify it and find similar knives on the Internet. I’ve been doing a bad job.

There are pocket knives with similarly sized S35VN steel blades available in the $100 range. I’m sure these knives do the job just fine, but they don’t have nearly the fit, finish, or quality of the Saros. They also don’t have handles carved from a single piece of titanium.

There are other nice pocket knives from huge manufacturers like Gerber. Some are comparable in size and weight, but they don’t seem like the right knife to compare to the Saros either.

I’m looking for the difference between Budweiser and craft beer, or more accurately between a Lotus Elise and a Mazda Miata. What is the search term I need to use to find other EDC knives that are comparable to a craft beer or an Elise? I haven’t found it yet!

Should you pay $300 for an everyday carry knife?

This is difficult for me to answer, because I don’t often carry a knife in my pocket. I’ve had this Solinger knife for 30 years. Similar basic pocket knives can be found for around $30, and I wouldn’t be surprised if they’d hold up just fine in your pocket for 30 years. Sure, my Bear Hunter knife would be too heavy to carry, but I am certain there are fine pocket knives that would last you a lifetime in the $30 range.

My Swiss Army Cybertool has spent most of its 20-year life living in my laptop bag. I expect it will be in there for another 20 years. It should probably be noted that I hate carrying the Cybertool in my pocket, because it is too heavy. At 150 grams, it weighs nearly twice as much as the Saros. For many reasons, these aren’t comparable knives. 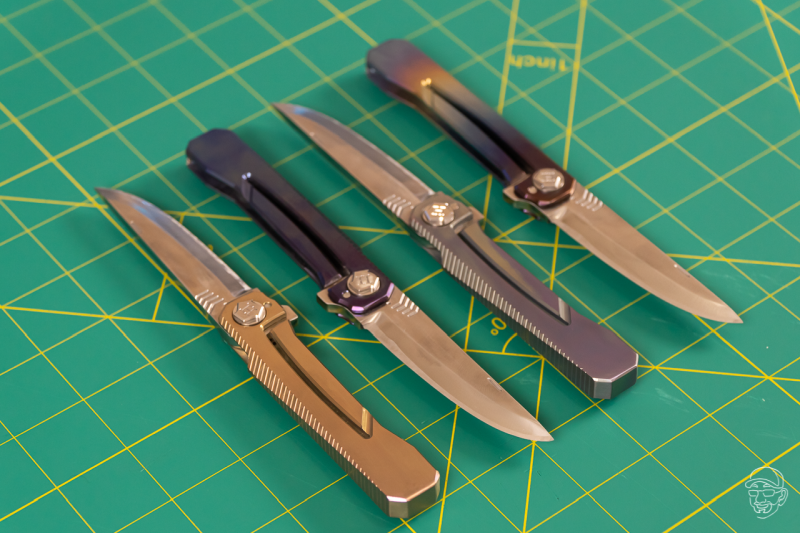 If you’re going to carry a tool around with you every day for 10, 20, or maybe even 50 years you should invest in a nice, sturdy, reliable tool. Spending $300 on a tool that you use every day for 30 years isn’t a bad deal at all.

I’d say if you have the budget for it, and you won’t miss the $300, you’ll love the Saros. I am certain there are plenty of other badass knives out there, but I’ve never held another knife like this.

I may not be a knife guy, but I like tools, and I love beautiful tools. The Saros is an absolutely gorgeous knife. I’ve been fidgeting with it ever since I got my hands on it. I’m cutting open every Amazon package with it. I’m also showing it off to everyone, because it is awesome. I tried slicing up a potato with it, but that didn’t go so well. It is now obvious to me why chef knives are so thin!

I’ll report back over at patshead.com after I’ve been using my Saros for a couple weeks.

Are you an EDC enthusiast? Which knife do you carry? What do you think of the Saros? Let me know in the comments, or stop by the Butter, What?! Discord server to chat with me about it!