My friend Andy pointed me at this $15 HDMI capture device. I don’t have an immediate need for something like this, but it is so inexpensive, and I figured it might come in handy, so I had to try it out! 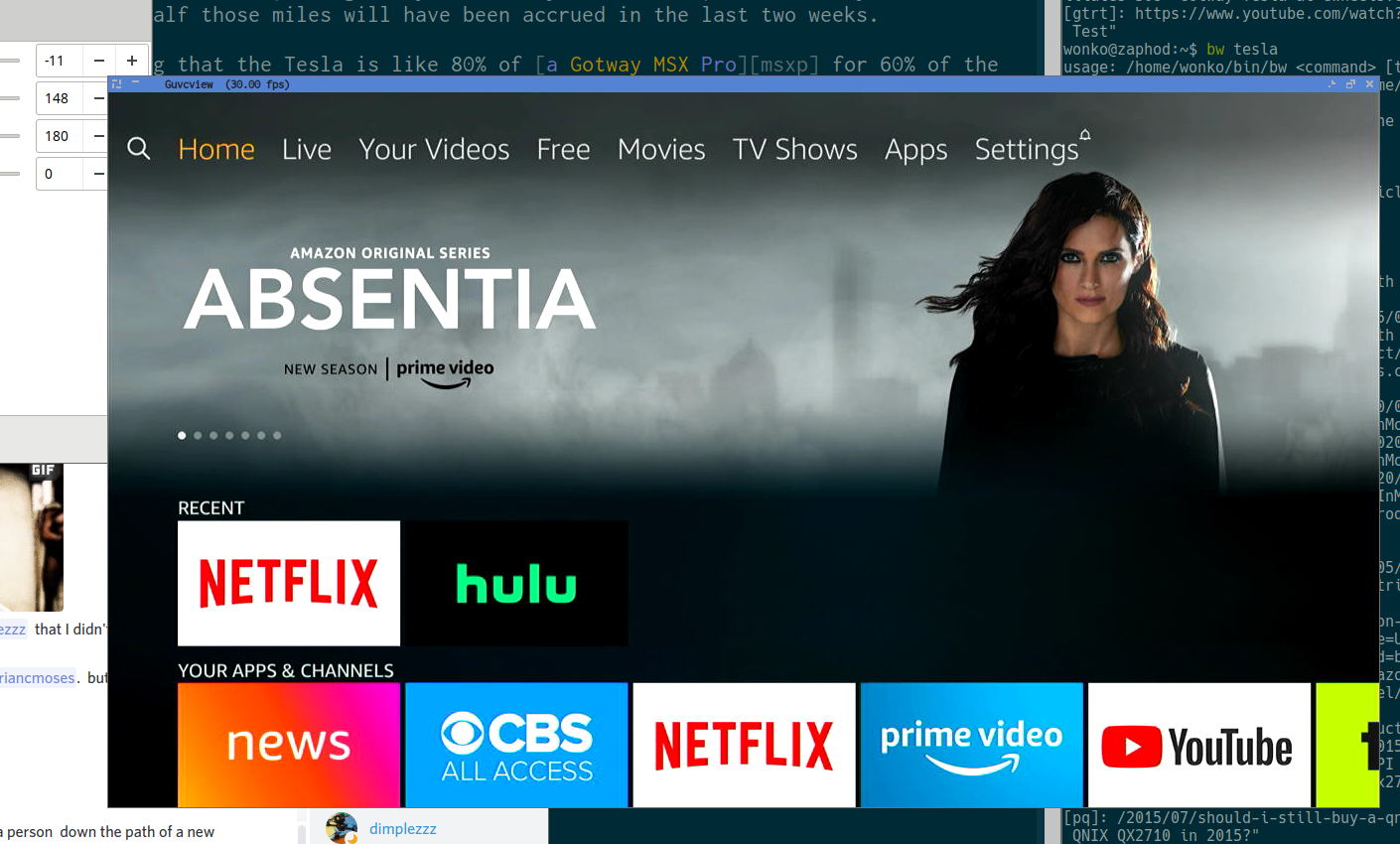 The Etermal capture card shows up in Linux as a MACROSILICON USB video capture device. It worked fine in guvcview and OBS Studio. I had to adjust the color space to get 30 frames per second out of it, but once I did, it seemed to work fine. I was also able to capture audio after setting it to 44.1 KHz.

You get what you pay for. This is a USB 2.0 device. It doesn’t do any video compression on the device either. That’s why it can only capture at 30 frames per second, while 1080p is actually 60 frames per second.

The manual says it will accept a 2160p30 or 1080p60 input. As far as I can tell, the output resolution and input resolution are independent. For my test, the easiest device I had nearby to plug in was an Amazon Fire TV. This Fire TV is set to output 1080p, and I was able to capture video cleanly at 480p, 1080p, and anything in between.

What am I going to use this for?

I figured it would let me use my Canon 6D DSLR as a webcam. I’ve had trouble with this in the past, though. The 6D doesn’t output 1080p. I’m pretty sure it will output 480p and something not unlike 720p. The last HDMI capture device I used was forcing the Canon to 480p. By the time you crop out the black bars, you aren’t left with many pixels.

I look forward to testing this out with my Canon 6D, but it will have to wait. My only compatible HDMI cable is attached quite well to my monitor stand, so I won’t be able to do the test today!

For me, the key aspect of this device is that it works out of the box on Linux.

UPDATE: What am I doing with this dongle now?!

I’ve been using this HDMI dongle along with the HDMI out put of my Sony ZV-1 to record every episode of The Creativity Podcast. The Sony ZV-1 has been fantastic for this. It is made for vlogging and live streaming, so it is easy to get it into a mode where there is no information overlaid on the HDMI output. Its autofocus is lighting fast and terrifyingly accurate.

Not only has the Sony ZV-1 been great, but the HDMI doodad hasn’t failed me. I thought it did once when my screen went black while recording, but that was my own fault. I forgot to plug the camera into power and my battery died!

I just plugged the camera in, powered it up, and OBS and the dongle didn’t miss a beat.

What else can you do with something like this?

Around Christmas time, my friend Brian gave me a complete Raspberry Pi-KVM setup. The Pi-KVM acts as a remote keyboard, mouse, and video display over a network. This lets you access the console of a PC or server even when you can’t have physical access to it, and you can even reconfigure settings in the BIOS.

The recommended USB-to-HDMI dongle currently recommended for this project is this same dongle. I have two of them now!