I know we are in the middle of a pandemic, and we tend to be repeating the same boring days over and over again, but somehow it feels like only last week that I was writing one of these monthly update blogs! How can this be?!

I flipped through all my blog posts, tweets, and Instagram posts since my last update. I’ve done more stuff this month that I expected, but so much of it revolves around personal electric vehicles (PEV).

I usually try to put the various headings in these blogs in roughly chronological order, but I’m throwing that out the window today. I’m going to lead off with the most exciting event of the month!

I fell off my electric unicycle, and I hit the ground!

This is most definitely my most exciting and painful event so far this year! Don’t worry. I didn’t get seriously injured, so you can most definitely feel free to laugh at me!

Today @patsheadcom was showing off his brand-new #electric #unicycle while we flew #quadcopters. I took this chance to record some cinematic footage that he could use his blog (See: https://t.co/nePTRq59rq) and then #disaster struck! #wasted pic.twitter.com/amR7cs1yaJ

We were meeting up at the abandoned golf course to fly FPV miniquads. The spot is only 3 miles away on my unicycle, and I don’t have to spend much time on high traffic streets to get there, so I rode over. I packed light, and it was awesome!

Brian was interested in getting some cinewhoop practice in, so I put on my new helmet, and I took some slow laps around the parking lot on my new Gotway Tesla. Going slow and steady would help Brian keep me in frame.

I was slowly making a slalom around the trees in the parking lot. I was going slow, and this really was no big deal. I do stuff like this all the time.

Before ordering the Tesla, I saw a mention on YouTube that on tight turns I might experience a dipping of the inside pedal. YouTube is correct. I experienced this dip in front of my house while doing a 180-degree turn. My shoe and the corner of the pedal scraped the pavement pretty good, but I didn’t have any trouble staying upright.

I was pretty sure this is what happened when I fell off the wheel, and the video sure seems to confirm it. If this happened while making a turn to the left, I probably would have managed to jump off. It looks like my right foot got stuck behind the Tesla, and that’s my dominant foot, so I was more likely to get hung up.

At the time, the Tesla was calibrated with the pedals almost perfectly level. You might notice I was riding the Tesla backwards in this video. You wouldn’t believe how many times I’ve almost accidentally done this. All the preflight checks for Brian’s cinewhoop and whatnot probably got me just distracted enough not to verify the direction of the wheel. It is too bad the Tesla was calibrated perfectly level, because this would have been a great scapegoat for my fall!

[My InMotion V5F][v5f] was set up with the front of the pedal raised about 2 degrees. Gotway doesn’t let you configure your uptilt like this, but you are able to manually calibrate the wheel at whatever angle you choose.

I’ve calibrated the uptilt to about 2 degrees so far, and I may go a bit farther. It should make for a more comfortable ride, and it might also give me a few extra millimeters of clearance on tight turns!

I upgraded to a bigger electric unicycle (EUC)

My InMotion V5F starter EUC was holding me back. If I was riding alone, I wouldn’t have upgraded. The V5F’s range and speed are perfectly adequate for my needs.

Then Chris upgraded to a real electric bike. Her top speed has gone up a bit, and her range is essentially infinite now. We often ride with our friend Tanner, and his unicycle has 70 or 80 miles of range. We were starting to get to the point where I couldn’t keep up, or we started having to adjust our trips due to my range limitations.

I couldn’t keep putting off the upgrade!

My new Gotway Tesla just arrived, and it is absolutely ginormous compared to the little Inmotion V5F, but it still for in the guitar stand! pic.twitter.com/jFEseKHWZR

I was tempted to just order a ridiculous wheel like Tanner’s MSuper Pro, but I shouldn’t be riding that fast, and it is awfully heavy. I deliberated quite a bit before a sale at eWheels put the price of the Gotway Tesla down at $1,350 shipped from its usual price ot $1,575.

The Tesla is an older wheel, but it has been modernized a bit, and the specs are nearly perfect for my needs. It can cruise near 30 mph, has more than 40 miles of range, and a powerful 2,000-watt motor.

I’m finding myself wanting to write down all the reasons why I chose the Tesla, but I already wrote that blog post, so I’ll skip that part. It is a good wheel, the sale made it an excellent value, and I’m quite pleased with it.

I bought a motorcycle helmet

I don’t think I’m ready to write an entire blog post about helmets, so this is all you’re going to get for now!

I’ve been wanting a helmet with chin protection. Now that I have a wheel that can reach 30 mph, I figured I needed this upgrade sooner rather than later!

When I talked to my father in Scranton yesterday, he said it was cold, and that it would be below freezing overnight. In the middle of May. I'm glad I'm not up there in the cold! pic.twitter.com/doWki8lJ39

I was looking at mountain bike and motocross helmets. I remembered how much the cold wind made my eyes water when riding 15 mph in February. That will only be worse next winter when I’m riding at 25 mph, so I started looking at goggles to match up with the motocross helmets.

I’m still going to shop around for a more compact helmet with chin protection, because the motorcycle helmet is definitely overkill for cruising through the park’s bike trails at 15 mph. I’m glad I have the real helmet, though. I’ll wear it whenever I plan to take a higher-speed trip on the streets!

I assembled a Pace Aventon 350 E-bike

We ordered a real e-bike for my wife. We chose the Pace Aventon 350. I already wrote a whole mess of words about this, so I’ll keep this brief. 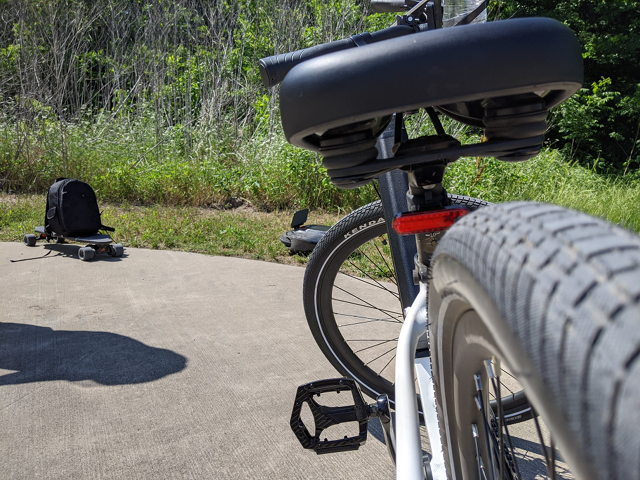 I quickly narrowed the selection down to two choices: the Pace Aventon 350 or the Ride1Up 500. Ride1Up’s more powerful 500-watt offering is closer in price to Pace’s 350-watt e-bike than Pace’s 500-watt model. If you’re taller than 5’4”, you should definitely give the Ride1Up a serious look!

Chris is more than a few inches short of 5’4”. The Ride1Up is only available in one size. The Aventon 350 is available in three sizes and two frame styles. We bought the small size with a step-through frame.

Chris is barely 5’ tall. We set the seat to just about the lowest position before her test ride, and that was much too low. If you’re small, the Aventon 350 should be a good fit for you!

She’s already broken 20 mph on several occasions, and her first 12-mile journey using the pedal assist feature only burned about 10% of the battery.

She might have trouble keeping up with Tanner’s Gotway MSuper Pro, and I pull ahead every now and then on my Tesla, but she’s holding her own. I don’t expect she’ll ever feel any range anxiety, either!

Riding the bike trails led to some cinewhooping

We were going for a ride a few weeks ago, and Brian and I both decided to bring our smaller FPV drone backpacks along with us. On our way around the lake, I noticed a bunch of flowers blooming along the side of the path up the hill. So we stopped to take a quick cinematic flight.

What do you think? I feel like my second flight came out a lot better! pic.twitter.com/6mzBOLiM4C

The flowers seemed prominent to the naked eye, but there’s way more green in the video than flowers. The park was busy, so we had to do a lot of waiting for the trail to clear, and I started to have video issues on the other side of the intersection.

The next time I rode through there, it was easy to see why I had a poor video signal. When I fly down the hill and to the left, there may have been six or eight trees between myself and the quad.

I think this would be a nice spot to do some chase footage of some skateboards, OneWheels, and electric unicycles. What do you think? I’ll have to find a better spot to stand when I fly for that!

OoberLights prototype boards are here and they are functional!

This is by far the best news I’ve had this month. Do you think that’s why I left it for the end of the blog, or did I just make a mistake?!

My RGB keyboard is called up to fill brightness. The #OoberLights board is set to 20 out of 255. pic.twitter.com/xZSLExocy0

I’m excited about our OoberLights project. It is an open-source RGB LED module with WiFi and USB connectivity. It currently has two rings of concentric layers of lights, and each ring has 45 LEDs.

We had a slight bug in the hardware design, but I was able to fix the bug on 9 out of 10 of our prototype boards. The 10th board isn’t trash, though. We can still bypass the USB port to flash it, so I can still use it for demonstration purposes.

The software for the OoberLights project is in its infancy. I have a rudimentary web server running on the ESP8266, and the designer and I have a handful of flashy test patterns programmed in. You can choose the test pattern via the web interface.

OoberLights are meant to be mounted in a 5.25” optical drive bay in your desktop or server. We want it to be able to display useful information in a flashy way. Spinning colorful lights around the rings at various speeds to indicate network or disk throughput, and lighting up parts of a ring to indicate disk utilization.

This was going to be easy when the OoberLights were less uber. I originally suggested we have two rings side by side, and they weren’t even going to be RGB. Now we have three concentric circles with a pixel in the center of each ring. The possibilities have grown considerably!

I’m at the point today where I’m programming boring things. I need some infrastructure on the ESP8266 to easily have multiple animations running at the same time. Then I need to write some sort of parser to accept commands from the computer that’s controlling the lights.

I hope to have an OoberLights board displaying some sort of useful status information sometime this week. Do you think I’ll manage it? I am a terrible programmer!

Considering that everything has been shut down, I think I’ve had a lot going on over the last month. Definitely more than I expected!

Things are starting to open back up here in Texas, but that won’t be changing my habits. I’m one of those immunocompromised folks, and I’m not even the only at-risk individual in the house. I’ll just continue working on things that I can work on here at home, and riding my EUC.

What do you think? Am I doing a good job? Should I be working on something else? What other new skills should I be learning while I’m locked down? Do you think I’m making quick enough progress on the OoberLights project? Let me know in the comments, or stop by the Butter, What?! Discord server to chat with me about it!